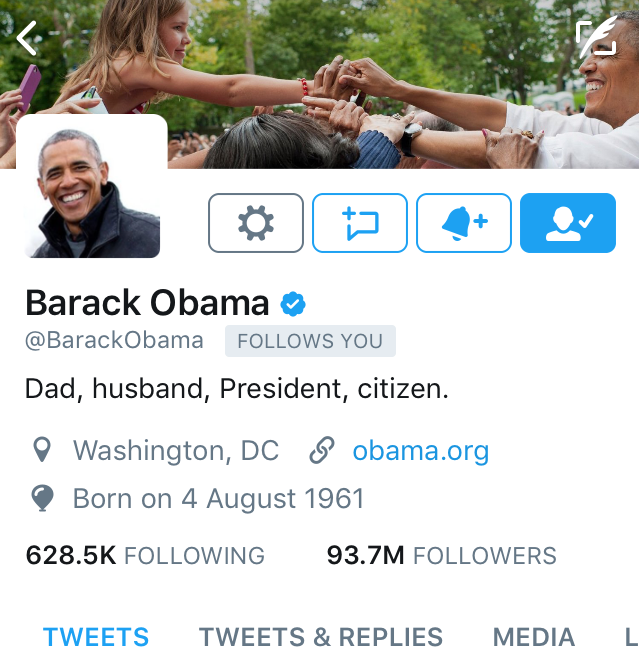 So today while on my holidays in sunny France I was surfing around my various social media accounts.  I ended up looking at something on Barack Obama’s account on Twitter feed and to my great surprise I saw ‘follows you’ next to his name!  When I saw this i nearly fell off my chair!

At first I thought, have I got the right account?  Am I being followed by the real Barack Obama? But a look at the account and the little blue tick do indicate I am.  I then did a bit of a google search to see if it was some sort of con or internet trickery… not from what I can see!

Now being a realist I fully understand that he follows over 600k people…. so I am not the chosen one or anything.  Number like these mean he is unlikely to notice any of my tweets popping up in his feed.  But out of his 94 million followers is still not bad… still sort of made my day!

The other factor I am acutely aware of is that Barack Obama with all the tasks and events he has, it is highly unlikely that he manages his own twitter on a day to day basis.  But again I am still pleased that somebody… somewhere that is part of the Obama team has decided for whatever reason I am worth a follow!  I think the fact that Michelle Obama is so firmly involved with the US and worldwide health and physical activity agenda may be a driving factor in the choice to follow me.

All in all the addition of this very famous follower to my Twitter account has made my day and that is something I thought was worth sharing!  Next on the list… get a response to a tweet or a retweet!

This error message is only visible to WordPress admins